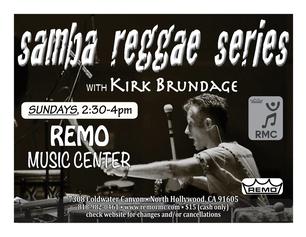 DONATIONS
Drumheads also were donated to youth groups in Brazil.

Seen here are players and directors of the groups:

"A Banda do Mestre Memeu" and "Tambores e Cores".

AFRO-BRAZILIAN COMMUNITY CLASSES @ the Remo RMC
The Afro-Brazilian percussion class met Sundays at the REMO Recreational Music Center in North Hollywood, from 2012 until its closing in 2017. Taught by

The SAMBA REGGAE INTENSIVE was an exciting 2-day immersion into the signature rhythms of the top 3 groups in carnaval today: samba afro of Ilê Aiyê, ​samba reggae of Olodum, and frevo baiano of Timbalada. Day 1 focused on individual parts and instruments, while Day 2 put together complete ensemble arrangements. Standard vocabulary was combined with the latest innovations from carnaval 2016. Watch the highlight video HERE.

A follow-up to the INTENSIVE, the SAMBA REGGAE SERIES was a 10-week journey to not only review material covered during the INTENSIVE, but to explore other rhythms these groups play. Also included were demonstrations of creative ideas for congas, cajon, and kit—plus songs, history, choreography, and exercises!

THE SAMBA REGGAE INTENSIVE & SERIES @ the Remo RMC
The rhythm samba reggae was created by Olodum during the mid-1980's in Salvador, Bahia, Brazil. However it actually has its roots in batucada, encompasses many groups, and continues to evolve. The following workshops & classes focused on the top groups and their signature sound—that all together make up carnaval in Bahia today. 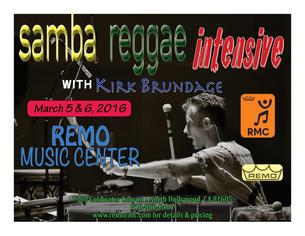