Kirk Brundage is a classically trained percussionist who went on to play in Brazilian carnaval.

Kirk got his professional start in his native up-state New York, playing for many years as an 'extra' with the Buffalo Philharmonic Orchestra, and as a member of the Maelström Percussion Ensemble—plus chamber music and theater productions. He earned a Fulbright to Denmark and an MFA from CalArts, before winning the International Solo Music Competition of the German Radio (Munich). Kirk also gave many solo performances around the US and Europe.

However, inspired in his youth by Brazilian percussion legends Airto Moreira, Naná

Vasconcelos, and Paulinho da Costa—Kirk's restless spirit eventually took him to Cuba and Brazil to explore new musical horizons. In Cuba he studied the popular and folkloric drumming traditions with the Los Muñequitos de Matanzas and Roberto Vizcaino—while in the United States he studied with African master drummers Bernard Woma (Ghana), and Malik Sow (Senegal). But it was traveling to historical and mystical Salvador Bahia, Brazil, that Kirk's passion became the roots of samba, sacred music of candomblé, and the latest carnaval innovations. This culminated in the rare distinction of a non-Brazilian playing in carnaval with the renown percussion ​group Olodum.

Since relocating to Los Angeles, performance

highlights have included: the Latin Grammys

with Brazilian pop-star Daniela Mercury, a

show with The Police drummer Stewart

Copeland, and a recording for​ Lincoln with

A REMO Artist, Kirk has taught at UCLA and

in Taiwan. He appeared at PASIC in support

of his book series, published by Alfred,

CDs: Percussion Music from the US and

Europe, and TRIBUTE - An Homage to

Master Drummers and Teachers in

Kirk's work has been reviewed in Modern Drummer and Percussive Notes magazines—plus featured on Brazilian Television. 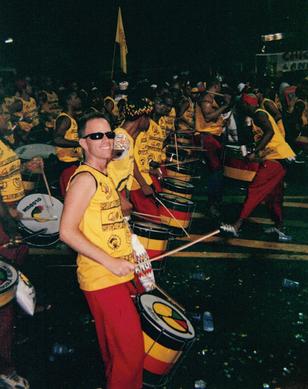